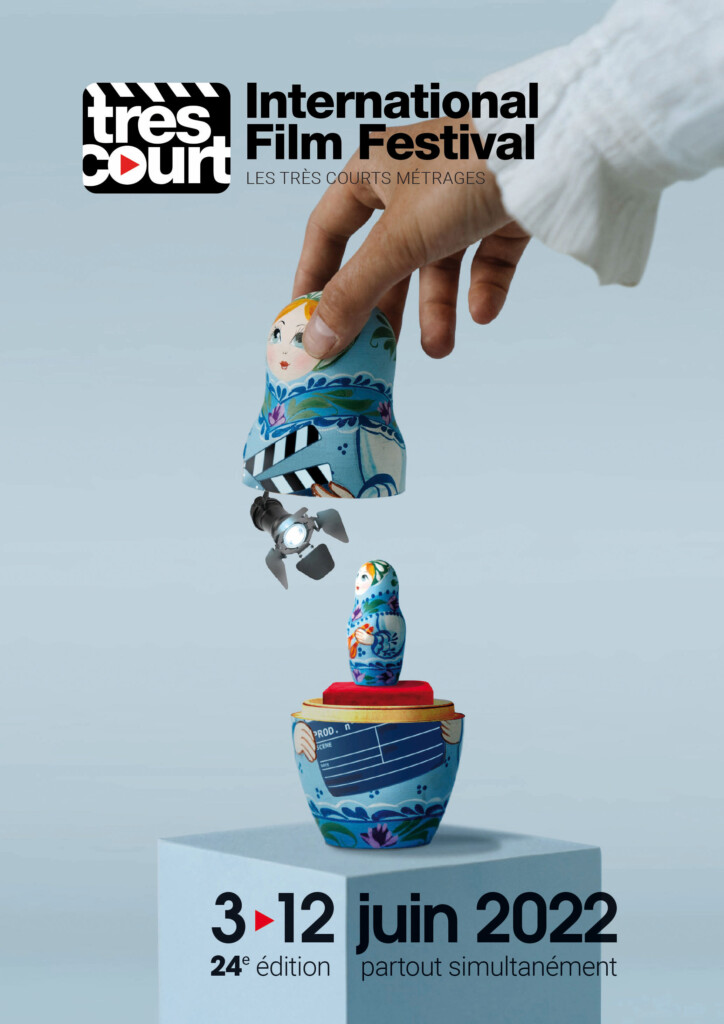 The Très Court International Film Festival organizes its 24th edition from June 3 to 12, 2022 in about fifty cities all over the world .

Its 24th edition will take place from June 3 to 12, 2022, with the support of cultural structures from a dozen countries. Le Très Court will travel from the East Coast of the United States to Egypt, from Greece to Italy, from Morocco to Chile and of course to France where a dozen cities will open the doors of their screening rooms during the ten days of the event. Spectators from all over the world will have the pleasure of discovering nearly 140 very short films, divided into 2 competitions and 4 thematic selections. As every year, at the end of the screenings, the spectators will be able to vote for their favorite film. The International Audience Award will be given to the film that has received the most votes from all over the world.

The partner cities have the possibility to broadcast 2 competitions and 4 selections out of competition. At the end of the festival, 9 prizes are awarded, including an International Public Prize.

What’s special about the festival? Telling a story in less than four minutes, including the title and credits.

This format may seem unlikely. And yet: in an era where everything is moving fast, where climatic, social and technological changes are at the heart of reflections and questioning, the directors exercise their virtuosity through this format that goes to the heart of the matter. The festival is first and foremost an opportunity for young filmmakers to be showcased on the big screen to spectators and professionals from around the world. It is also an opportunity to laugh, to cry, to be moved, to be questioned or even disturbed by subjects treated with strength, with malice, with audacity, with poetry.

This worldwide event reaches more than 15,000 spectators on 5 continents.

This year again, more than 2,000 films were viewed by the selection team composed of about twenty French-speaking film lovers. Nearly 140 Très Courts were selected for their emotion, finesse, accuracy and power. They are gathered in 6 programs.

The International Competition is a kaleidoscope of the latest trends in world cinema for films under four minutes. 40 Very Short films compete for a place in the prize list awarded by the Jury, but also by a demanding audience.

The Women’s Words Competition highlights films made mainly by women, for women. Whether they are in front of or behind the camera, they are the ones who carry these films, offering a unique perspective on the world. This program is an opportunity for a creative tour of women’s realities in 22 films.

The French Selection, essentially from French-speaking filmmakers, presents the best of the French touch, without any chauvinism. 22 films follow one another with a lot of energy and, by chance of the programming, many of them focus more specifically on French youth.

The Family Selection, for young and old children, where 18 films open doors to magical, luminous and sensitive worlds. Most of the films are without words (or with little dialogue) so that the language barrier is not a barrier to wonder.

The Documentary Selection, created last year, opens a window on the world through portraits of incredible men or women, subjects of more or less burning news, universal or singular themes. In 19 films, the best of humanity comes out.

The Lets Laugh Selection (before the end of the world) is the great novelty of this year. Composed of 21 comic or tragic-comic films, this program offers a one-hour slice of fun, because it is good to laugh, and especially to laugh together in the same room.

Each year, the jury of the International Competition is chaired by a film personality. For this 24th edition, this honor goes to the producer and director Keyvan Khojandi as President of the Jury 2022.
He will be surrounded by professionals, artists and journalists who will have the difficult task of choosing the films and the joy of rewarding the most promising talents of the year.

Le Mag Cinema
More from OthersMore posts in Others »