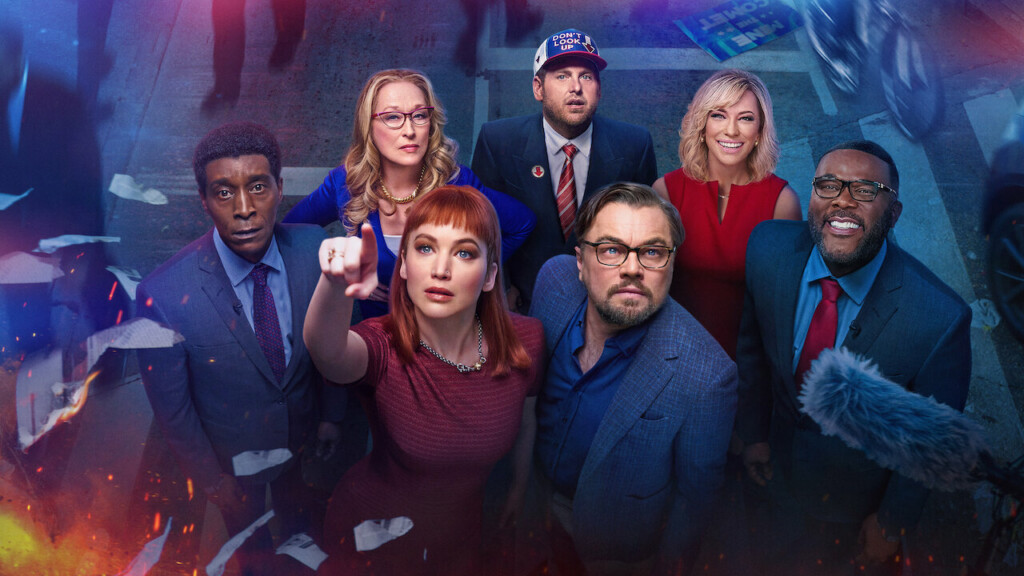 Don’t look up – Metaphor of a denial

Two little-known astronomers embark on a media tour to warn humanity that a comet is heading for Earth. But this does not seem to worry many people.

The synopsis above is the one present on the film’s page on the Netflix site. On other reference sites, such as IMDb, the synopsis is reworded to read “poor” or “mediocre”! Why? We don’t want to open a trial on some possible bad intentions, but it questions. Jennifer Lawrence (Kate Dibiasky) and Leonardo DiCaprio (Dr. Randall Mindy) play the central scientific duo. Both of them are indeed “unknown” and will make a thunderous entrance on the media scene in spite of themselves. However, they are by no means “poor” or “mediocre”, quite the contrary.

Kate discovers a comet as part of her doctorate in astronomy. Her calculations and those of her professor, Dr. Randall Mindy, lead to the same conclusion: this comet will collide with the Earth in six months and twenty-four days. It should crash off the coast of Chile, but its size will generate a huge tsunami that will destroy all life on Earth.

In our humble opinion, this catastrophic scenario does not fit well with the interpretation of this film that is often noted. A reading commonly made because Adam McKay expressed his faith in technological solutions to solve climate change. But the subject of the film is not there according to us. Who in such a situation (programmed and certain end of all life on Earth in the short term) would be concerned about the climate issue? Nobody or few people when we know how little attention the IPCC report (1), however cataclysmic, published last summer, received. Moreover, climate change is not caused by any cosmic event. No, this reading of Don’t look up does not satisfy us. This supposedly ecological theme does not appear in the book.

David Sirota, author of the story, and the director of The Big Short, author of the screenplay, use the story of a planetary catastrophe as a subtext for the health crisis we are experiencing. On second reading, the cosmic danger becomes a biological danger. It is indeed not forbidden to see in this comet that threatens life on Earth the Sars-CoV-2 virus. And, behind the technology used by scientists to try to destroy the Dibiasky comet, should we not see the anti-Covid vaccines? A sequence in computer-generated images seems to us extremely explicit on the answer to this question.

This reading of Don’t look up is troubling on several occasions and leaves one wondering about the epilogue of this feature film. An epilogue that is not quite an epilogue since the long final credits are interspersed with two sequences. These same credits also contain many messages in symbolic forms. Some of these symbols simply characterize the character played by the actor whose name appears on the screen. Other symbols are left to the free interpretation of each spectator…

The financial means implemented to make Don’t look up are consequent and can be seen on the screen. The post-production work and the special effects are countless. There is little to criticize in the direction implemented by McKay. We note an abuse of fields and cross-frames and, at the beginning of the film, an over-cutting giving at times an impression of overflow and over-rhythm. A less frenetic technical editing would have allowed a better fluidity and a better understanding of the narrative thread. This way of doing things is quite common in the big show films produced these last years. Fortunately, it only pollutes the first half hour of Don’t look up.

In terms of storytelling, the script feeds in part from NASA’s DART program. The worldwide distribution of the film on Netflix (December 24, 2021) follows the launch of the DART mission (November 24, 2021) by one month, to the day! The narrative keeps the duo of scientists Lawrence / DiCaprio as central characters. Both of them take on the role of whistleblowers in front of the public authorities and the media. Without parodying anything as everything seems plausible, McKay puts the political sphere and the media sphere back to back. Neither one nor the other shows itself capable of taking our whistleblowers seriously.

During this media tour, we discover the duo of hosts of the television show The Daily Rip as Cate Blanchett and Tyler Perry. In the mirror, another duo is enthroned in the White House: Meryl Streep as President of the United States flanked by a chief of staff – Jonah Hill – who is none other than her son. The first named here embodies a female double of Donald Trump while the second, adviser to his mother, could be assimilated to a male double of Ivanka Trump … One thing leading to another, McKay draws the portrait of a political current without opposition: a demagogic populism animated by a vision strictly limited to the short term. The inconsistency, cynicism, skepticism and indifference of these various interlocutors are all obstacles to mobilizing the population’s attention. The inability of the political and media spheres to prioritize information according to their level of seriousness is relayed and amplified by social networks, the main vectors for the hysteria of the popular masses.

These are only the first elements of a skilful scenario, without any dead time and with many twists and turns. In the end, McKay questions our relationship to information and the media. The media that make up the audiovisual 2.0 landscape are quicker to seek out the trivial and much less attentive to the real issues. Don’t look up shows in particular how to divert information to make it less alarming or traumatic for the public. It would be wiser to listen carefully to scientists and to ignore those who claim to be scientists on TV, charlatans and hucksters with multiple conflicts of interest.

The society described is split in two. There will be those in denial and whose watchword will be that of the original title: “Don’t look up“. The title complement “Déni cosmique” for the French-speaking audience of Netflix is perfectly redundant and unnecessary. The choice of the title itself is surprising. Why not have opted for the opposing slogan “Just look up”, that of the camp of reason, that of our main scientific duo? Strange.

Don’t look up also resonates strongly as a critical work of the ruling political class, in this case the United States, under the strong influence of the holders of financial capital. The impeccable performance of Mark Rylance is to be underlined. With physical features similar to those of Bernard Arnault, the actor plays one of these business leaders working in new technologies. His character wanders between Jeff Bezos and Steve Jobs or Bill Gates before ending up on Elon Musk’s side at the end of the film. Close to the political power as the main donor during the last electoral campaign, he condenses in his decisions the lobbying exercised on the political leaders and the liberties taken towards a population by the new technologies that have become invasive. Politicians’ calculations go hand in hand with those of entrepreneurs always interested in possible new sources of profit. These industrial and financial interests (including crypto-currencies) will not fail to deviate the scope of the initial plans from its trajectory, if not, perhaps, to deviate the trajectory of the comet. Besides, won’t we hear from the mouth of the character played by DiCaprio some well-felt denunciations towards these leaders and lobbyists?

Finally, the main weakness of the screenplay of Dont’ look up resides in its American-centric vision of a catastrophe whose scope is worldwide. Of course, other foreign rescue missions are mentioned but they are too quickly evacuated. They will therefore seem too little credible and too incidental for many viewers. Finally, we deplore the lack of progressiveness in the treatment of the population’s reactions. The indifference of the popular mass is followed without transition by the hysteria that seizes a population without initiative.

Whatever the level of reading – metaphorical story (the comet becomes a virus) or not – Don’t look up does not fail to question its audience. Its epilogue, notably by the “outcome” it proposes, cannot leave anyone indifferent. The use of a title in the negative form where its opposite and therefore positive version (“Just look up”) seemed more appropriate widens the field of possibilities and makes the emerging questions unfathomable

Metaphor or not, McKay uses all available resources to describe the impasse in which our ultra-liberal societies seem to be engaged. The decision-makers are incapable of providing the right solutions to the challenges we face. Don’t look up, without a doubt, questions us and sends us back to our weaknesses and contradictions.

1) Translation into French of the “IPCC Report: Summary for Decision Makers” .

Published in We highly recommend