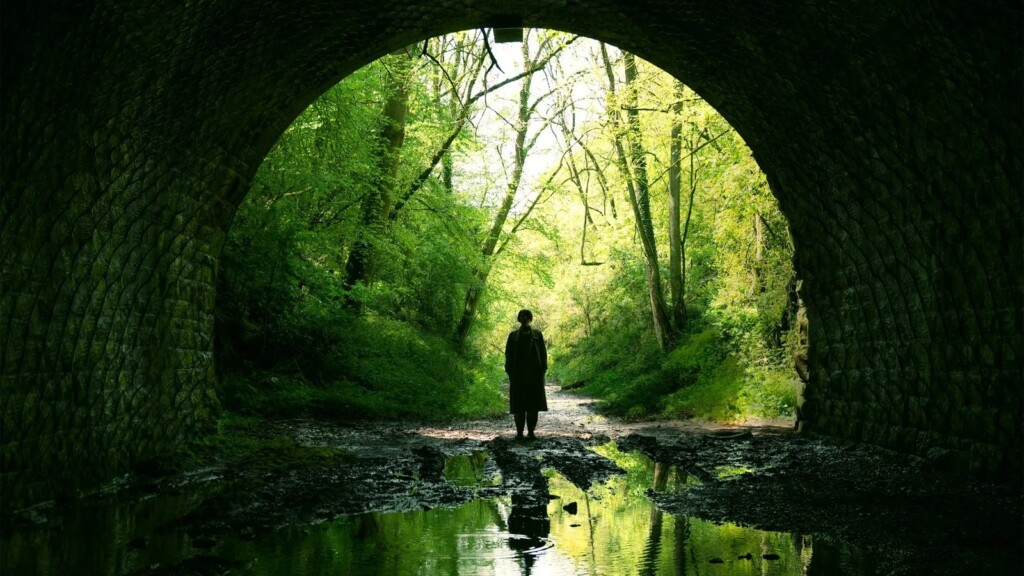 After experiencing a personal tragedy, Harper decides to isolate herself in the English countryside, hoping to rebuild her life. But a strange presence in the surrounding woods seems to stalk her. What starts out as a latent fear turns into a full-blown nightmare, fueled by her darkest memories and fears.

Ex-successful screenwriter for Danny Boyle in particular (The Beach, 28 Days Later and Sunshine), Alex Garland, passed to the director in 2014 with Ex Machina, delivers Men his third feature film. Garland signs with this film his return to the big screens of cinemas after Annihilation whose broadcasting rights had been bought by Netflix. Men also marks for the English writer-director a more pronounced dive into a struggling film genre: horror dramas.

The story of Men revolves around a main female character named Harper, played by Jessie Buckley. Men gravitate around her. They are the incarnation of evil. Among the male protagonists we note those played by Rory Kinnear. The English actor, accustomed to the realizations for the television, proposes remarkable performances. His acting can be placed here between that of John Malkovich, with whom he shares some physical traits, and that of Jack Nicholson. This comparison may seem adventurous for some of our readers, but we assume it in view of the multiple and fair interpretation provided by Kinnear.

Alex Garland opts for a chronological narration interspersed with a few flashbacks that expose the separation between Harper and her partner James (Paapa Essiedu). This sentimental breakup (forbidden fruit?) is the prelude to a dramatic event around which the horrific plot imagined by the writer-director is woven. The story of Men is less complex than those of Ex Machina or Annihilation. It thus spares little originality and few surprises with regard to the cinematographic genre approached. The advanced symbolism being quickly revealed, the story can turn out to be quite conventional, which is a small disappointment in our eyes when we refer to Garland’s past as a screenwriter. Thus, there is not for the spectators the effect of loss of space and time noted in the two aforementioned feature films. This is unfortunate because this aspect would have thickened the narrative by making it even more mysterious.

The realization of Men is precise and neat. We can underline the very beautiful capture of the natural sounds emitted by the outside environment and its animal and vegetable components. We find all of Garland’s appetite for filming a luxuriant nature as we had seen in Ex machina and Devs (201x). In the same way, he has once again favored shooting in a limited number of locations, which favors the desired emergence of a feeling of claustrophobia. In this, the inhabited, even haunted, mansion offers an excellent setting for this purpose.

the narration is like a waking nightmare for women. It is like a tunnel whose exit is discernible in the distance but haunted by multiple echoes and resonances, elements that are replicated, like our men, in a soundtrack mixing echoes and baroque vocals. The result is a real mental and atmospheric film. In this respect, Men does not deviate from the other films in Garland’s filmography. On the other hand, the script does not rely on scientific elements, which contributes to the development of a simpler story as mentioned above. Like its predecessors, this feature film is also a visual proposition. Here, the visual style adopted is less marked than the one that draped notably the final of Annihilation. The visual researches of Men are indeed less marked, but the efforts made on the direction and its images deserve to be underlined. They make this feature film a rather characteristic and singular work.

Ultimately, Men is Garland’s most accessible story to date, provided that viewers appreciate the horror genre on the big screen. The whole is enhanced by fantastic and sometimes even phantasmagorical elements. The notion of mourning is questioned as well as the toxicity of the male gender that Harper must fight. This male gender, here reproductive in the same way as its female counterpart, haunts Men, a film about… gender(s), from start to finish.

Published in We recommend